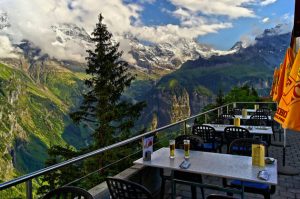 While attending the Greater Vancouver Chamber of Commerce Business After Hours tonight at Cellars 55 – which is a very cool venue ( especially where they store the wine) I met Mike Difabio.  Mike is the owner of Fortside Brewing Company a start up local craft brewer and he is in the process of building out his space and soon will be brewing. I am excited for him.

The economics of brewing can provide very nice margins, and if you get yourself established in a properly sized space, keep the overhead low you can carve out a nice customer  niche in the beer drinking community.

And for that reason here has been lots of local brewing activity the past couple of years.   Sunny Parsons with Heathen Brewing, Mill City Brew Works in Camas, Amnesia in Washougal, Loowit  across the street from the Hilton, Mt. Tabor and  Dirty Hands posted their flags just a couple blocks from Salmon Creek Brewing which has been a long time downtown representative of the craft brewing community.  Ghost Runners Brewing  a two year old company in Felida should be getting themselves into a more permanent location soon.

What was interesting  in meeting Mike is that I’ve been working with two other serious contenders ( with business plans and decent financial backing) looking for spaces to set up  brewing operations, and I’ve had conversations with other brokers who  have prospects in tow.

We are getting close to have a ‘critical mass” of activity burst upon us.   An informal estimate on my part says we will have close to two dozen brew pubs and or tap rooms in Clark County within the next twelve months.

We are all aware of the dynamic beer and brewing scene Portland has developed over the past decade.  For the most part PDX  brewers have looked across to the northbank of the Columbia and said, pass.  Laurelwood came to Battle Ground  and couldn’t sustain their operation, and a numerous  others have scouted the County and even been recruited by Landlords, but elected to stay put. That doesn’t mean that some may not eventually make the leap, but they have left a gap and an opportunity.

The aspect that I am most enthusiastic about  is seeing local entrebrewnuers  stepping forward to fill this vacuum and create  a locally  grown  beer / brewing culture adding to our historic heritage as a brewing community.

That will make this industry more sustainable, more dynamic, and create even more momentum for capital investment and provide employment. Clark College Continuing Education has even discussed a fully accredited training program so that there will be a solid supply of employees as these companies grow into more sizeable operations.

You can do your part. When they open, check them out.  Ask larger chain restaurants to reserve several tap handles for local brews.  Attend the growing number of brew fests and take some friends.