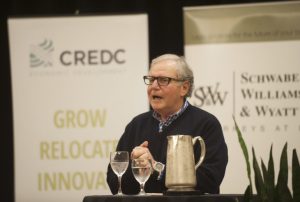 The Grow Vancouver series evolved from five  years of Pub Talks, which began in 2009. It was the first sustained effort by the CREDC to reach out and highlight the entrepreneur and start up community here in Clark County and was launched to help build on one of the planks of the CREDC strategic plan – which is help to nurture and sustain local companies that can add jobs.  One,  they are often on the cutting edge of the economy and two, you can be much more effective and cost efficient than trying to recruit across the country or around the world.

Tim Boyle’s story serves as a reminder that even when things look bleak, you can find the right path.  Tim’s father passed away when he was 21 years old, and he left his studies at the U of Oregon to return home and help his  mother Gerte Boyle run the company.  Within about six months they were sure they had come to the end of the road, but were able to secure  advice from several key business experts, which led to the reinvention, and revival of the company.

In a direct answer to an audience question Boyle said he’s feeling very positive that eventually there will be a Columbia Sportswear presence in Clark County.

Kudos go to Max Ault of the CREDC  who was responsible for making 2015 the year of transition from PUB Talk to Grow Vancouver.  His goals was to create an event that allowed the public to get up close and personal with some of the entrepreneurial companies who are leading the continued economic revival  and in some cases creating the jobs of the future.  Looking forward to seeing what 2016 brings .