As part of the general higher economic activity levels here in Clark County the past twelve months  we are seeing a strong expansion in the number of coffee outlets.  Dutch Brothers has been very active in searching for sites and has two under construction in Hazel Dell .  This one , located at Northgate  Center on 99th Street and  Hazel Dell Avenue makes daily progress toward a mid September opening. Dutch Brothers who uses a franchise model for the majority of their expansion has a second location  adjacent to the new Panera Bread / MAJ Development  project on Highway 99.  Construction there has not begun.

Other recent announcements on new coffee locations- Compass Coffee on Main street owned by Bryan Wray, is going to open a second location in downtown Vancouver at the corner of Washington and 9th while the Luxe located at Washington and 7th and owned by Joseph Nutting and Joel Nehm, owners of Cream & Sugar Café, were joined by nearly 100 people on Thursday at the grand opening of their newest location: LUXE, by Cream & Sugar.

Nutting and Nehm started Cream & Sugar with a small location inside the VancouverCenter Building in 2008. Their next step was expanding to their 15th street location next to the Mill Plain Kinkos, and last year they became the official coffee shop in the ESD #112 community building.

LUXE is the pair’s newest vision, combing the café experience with fast casual dining in an elegant setting. The eatery is filled with rich tones, warm wood and padded chairs. You still order at the counter, but enjoy a higher-end atmosphere for lunch and dinner. 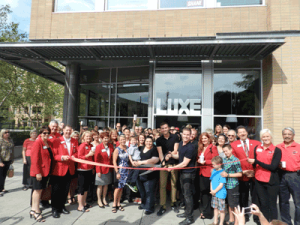