Wednesday July 23rd the Vancouver Business Journal held their 20th annual Top Projects recognition ceremony.  This years ceremony was well attended and you could feel the enthusiasm and optimism in the crowd for the improved business activity levels from the past several years.

Held at the former Vancouver City Hall – located on Broadway and 13th street and renamed Block 56 attendees were able to see how effectively the Firstenberg family has repurposed what was a tired lackluster space into something modern, simple yet very appealing.   Berger-Abam actually made their first public announcement that within a few weeks they will become the buildings first tenant.

Top Projects was highlighted by a significant number of public sector projects many resulting from the passage of education levees, as Clark County continues to answer the call to invest in their future.    Special recognition was given to the team that has rebuilt Evergreen School District’s Crestline Elementary.

While they did not win the Top Project – we’d like to plug MAJ – Mike Jenkins and his team for bringing new life and energy to Hazel Dell with the redevelopment of the former Steakburger site.   This project is literally changing the landscape on Highway 99 and we believe it will have impacts and ripples all up and down that corridor. 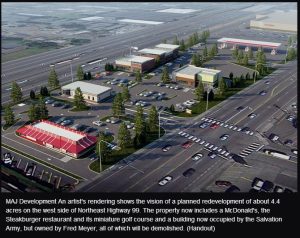 VBJ owner John McDonagh noted in his recent editorial that Top Projects has been an ongoing program that is starting it second decade.  The VBJ has done a great job at bringing recognition to the excellent work being done by the development and contractor communities here in Clark County.