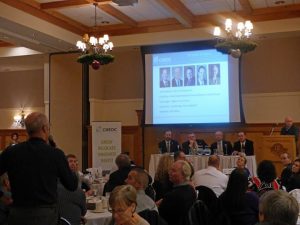 My big chance for a question to the panel

The Columbia River Economic Development Council held their final  quarterly luncheon of 2014 at the Heathman Lodge Monday January 15th.   The topic was how strategic planning is vitally important to creating a vital economic future.

This is topic is important because the effects of the 2008 Great Recession set our economic development base back about four years, and brought economic hardship on a wide range of Clark County residents.  The panelists presented examples of recent planning efforts that have born great fruit, or were started  well before those economic hard times and will provide a foundation to surge us forward.

The panel was moderated by John White recently retired from Berger Abam, who built his career around cajoling  public agencies to peer into the future to create a vision and a work plan to get there.

Todd Coleman of the Port of Vancouver shared thoughts on how in 2005 the Port realized they needed to revamp their rail access to ensure they were able to  compete in the global economy.  Chad Eiken of the City of Vancouver took us back through the foundational stages of Esther Short Park’s  rebirth and how that has led over roughly  thirty years to the commencement  of the Water Front project that will finally rise in 2015.

Scott Higgins Mayor of  Camas spoke of a 35 year effort to diversify Camas’s economic base away from a single industry – paper to more modern high tech employers. Steve Stuart reminded us how we all literally stand on the shoulders of predecessors who were willing to take the time to envision an ever brighter future.  In the case of Ridgefield, an old mill that manufactured railroad ties left a legacy of pollution and creosote that was  barrier to the city being able to access it’s own water front. A twenty year effort by the Port of Ridgefield and many partners has cleaned up that “disaster” and laid a new foundation for a new hub of residential and retail activity that will be a magnet for growth.

1. Economic development is a team sport – it takes many agencies working together.

2. Government agencies are best at laying the foundation – the private sector then brings the capital and the jobs.

3.  While there is competition – success is usually maximized with cooperation :an example Clark Regional Wastewater District and Ridgefield working together with Clark County to increase sewer capacity

4. Significant additional work needs to be done to get parcels of  land prepared for use. There are companies every month who don’t locate here because we are not ready.

5. Watch for the Port of Vancouver to play an even larger role in partnering with several other agencies – particularly Clark  County to find a solution to revitalizing the railroad lines through the heart of the county.

I would describe the feeling in the room as quite upbeat, with expectations for 2015 being very positive.