[The following is an article written by Jim West for publication in the Vancouver Business Journal.]

2015 proved to be a very active year in the Clark County Office Market. Vacancy rates continued their glacial progress finally dipping below double digits, ending the year at 9.5%, according to the most recent annual Portland metro area market report produced by CoStar.

To the pleasure of the brokerage community, a number of local Landlords and enthusiastic commercial lenders, we saw over two dozen office building sales exceeding the one million dollar mark. The sum total was over one hundred and six ($106,000,000) million dollars.

Several local families were involved in the highest profile sales, lead most notably by the Angelo family who acquired the Riverview Tower, in a purchase announced last August. The Hickey family sold the Tidewater Cove property in October. Earlier in the year, the Hidden family transferred The Academy, consisting of three buildings, to the Fort Vancouver Historic Trust.

They were not the only players we saw in the medical segment. Gentech Dentist acquired the Northern Star building in Salmon Creek, previously owned by a local investment group headed by Brian Spencer. In Cascade Park, another of the medical condominium units was also sold by Marc Fleishauer. This sale garnered over $328.00 dollars per foot.

We opened on the theme that the rental market had improved with vacancy having finally dipped under the double digit market. With that said, there are still challenges ahead for office landlords in the two distinct markets.

Office users in Southwest Washington are value shoppers. It was only in the past twenty years that Clark County began to establish a growing presence of Class A buildings, usually defined as multi-story/multi-tenant with larger floor plates and an average of 70,000 sq. ft. The Financial Tsunami of 2008 set off a definite flight to more affordable spaces. 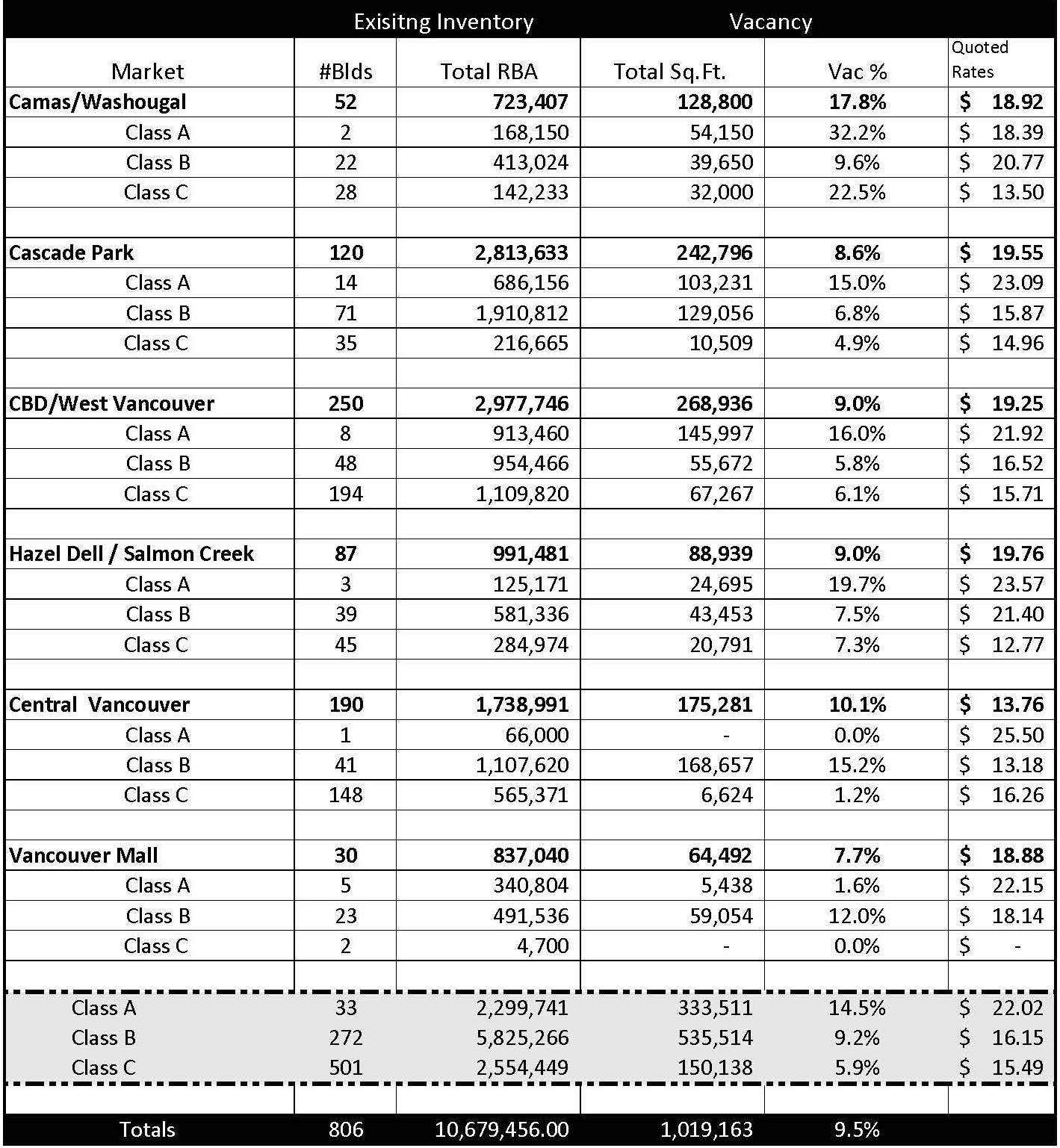 This chart illustrates the six sub-markets within Clark County, defined by CoStar, broken down into three classifications. In four of the six sub markets, Class A space has obstacles to overcome to arrive under that double digit mark. Vancouver Mall seems to have created themselves a very healthy market niche and we can understand why when considering their central position with ease of access to all parts of the county.

Good news for 2016, the growth of local companies coupled with continued high levels of success in business recruitment from our CREDC, we are predicting yet another year where consistent progress is made on reducing the vacancy rates across all three of the classifications.