Hazel Dell the next Hot Bed for Restaurants ?

If there is one complaint common to almost all Hazel Dell or Salmon Creel residents or shoppers it is the question why aren’t there more good restaurants in that part of town. For years the  myth was that the System Development Charges (SDC) by the Clark Regional Waste Water District were too expensive.  These costs are generally based on the per seat capacity of each project and were reputed to add $100,000 to the cost of any project.

Members of the CRWW district staff and Commissioners have always stated that this was an urban legend.  Historically sewer rates in the CRWWD service area have been some of the lowest in the region, and they have worked diligently to keep those SDC charges as reasonably as possible.

With that as back drop – here are some excepts from a recent press release from CRWWD that talks about two new restaurants that recently opened in Hazel Dell.

Having just welcomed Chipotle to the area, residents in Hazel Dell are poised to celebrate the opening of Panera Bread.  Scheduled to begin operation before Christmas, Panera Bread will open on the former site of the iconic Steakburger restaurant and miniature golf.

While sewer may not be your first thought when you hear of a new place to get your morning coffee or to grab a sandwich at lunch, development fees (commonly called SDCs – system development charges) are a key consideration when establishing a new business in any area. Knowing this, the District has worked to reduce the initial cost of sewer connections as much as possible. South Hazel Dell is the most affordable place in Clark County to develop a restaurant; the District’s “Tier 1” SDCs in the south Hazel Dell area are the lowest in Clark County and Panera also was eligible for Clark County’s development fee waiver program.  In addition, Panera received credits for building on a previously developed site, keeping the total sewer fee to less than $750.

You may recall I wrote about developer Mike Jenkins who owns MAJ Development, whose focus is redeveloping and reinvigorating strategic high traffic locations here locally.  This project is going to be the spark that changes the face of Highway 99.

The press release touted how-  the CRWWD  partnered with the developer to restore and relocate the aging sewer line on site while they completed underground work for the new development.  This forward thinking approach was a win-win for the developer, the District and ratepayers in general.  The initiative optimized the location of the line while completing necessary utility work in the most cost-effective and efficient way possible by digging up the site once.

My understanding is the SDC for Chipotle is just under $2,000. In the scope of one million dollar building, or half a million tenant improvement these development charges are a very minimal impact on a project such as these.  Expect to see more activity along the Highway 99 corridor, and up in Salmon Creek.

By the way I checked out Panera the Friday night after Christmas after catching a movie.  Very warm inviting interior with a fireplace where you can sit either inside or outside. They are  going to create a lot of fans. 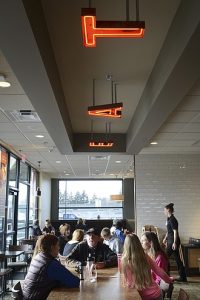